One last breakfast of coffee and medialunas (sweet croissants) and an hour or so of relaxation, then a taxi to the airport and a flight which left on time. Just before boarding we managed to use up our spare pesos on two fridge magnets of our names as car numberplates. 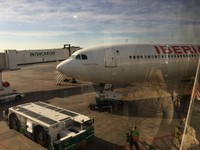 I read as usual, but for some reason I watched more films than I usually do on long flights; 'The Voyage of the Dawn-Treader', 'The Darjeeling Limited' and another one I've forgotten now. I started watching 'Dad's Army', but it was so terrible in comparison to the original TV series I stopped watching after only ten minutes or so. Dave busied himself with 'Zootopia'...

We landed in Madrid at 06:10 on Sunday morning. We had nearly five hours to kill before our flight to London, so we browsed the interesting parts of duty free without buying anything, played some cards, read, had a drink at a café and tried to doze off.

A nice smooth problem-free flight from Madrid, during which we managed to catch up on a bit of sleep. We landed at Heathrow at lunchtime and took the train back to St Albans.